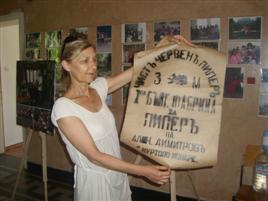 The third issue of the Kurtovo Konare Fest 2011 was held 10th - 11th September, 2011 under the slogan "From Diajo Alexander to the lutenica". Unlike previous editions, this year the Kurtovski babi started preparing the lutenica Friday night and it was ready for the first festival day - Saturday. The sun did not stop the producers of homely ketchup, lutenica, kyopolu and roasted red peppers to offer their products, as well as the local traditional dishes prepared by locals.

Representatives of AGORA Platform and America for Bulgaria Foundation tasted the dishes and home-made lutenici. Following the tastings performances of visiting Chitalishte groups started - colleagues form different locations presented their folklore songs and dances. In the late afternoon a service for health was held. During the official opening of the Festival the audience was addressed by Mrs. Emilia Lissichkova from AGORA Platform, Mrs. Miroslava Dikova - Bulgarian Society for the Protection of Birds (BSPB), Mr. Nikola Myhailov - Chairperson of Stamboliyski Municipal Council and Mr. Ivan Pirinov - Mayor of Kurtovo Konare. 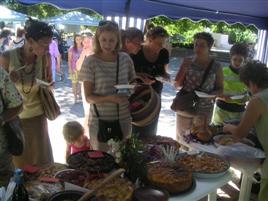 The "Lutenica Queen" this year became the youngest lady who participated in the home-made lutenica preparation Contest - Darina Brezova. Awards were given away for most delicious dish, pastry, the best homey cans of conserved vegetables and most attractive stall. The second part of the festival programme included performances by the hosts - the choir and dance group at Chitalishte "Luben Karavelov 1897" and the children from kindergarten "Detski Ray".

At the announced concert "surprise", there were a lot of classy performances by bards, rock and jazz guitarists. Our new international friends presented the audience with an improvised and totally unexpected performance - Sophia from Sweden and Myriam from Belgium.

In the evening at the Chitalishte building a photo exhibition was opened by Mr. Antoan Bojinov under the Workshop for Civic Initiatives Foundation (WCIF) Program "Living Heritage". The lovely almost summer night continued in the church yard where young poets read their poems in candlelight on the stairs of the Old Agriculture School. 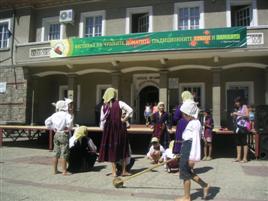 The second festival day begun with children's games and contests. The colleagues from Radilovo village and Svilengrad reminded to the audience forgotten children's games and in the afternoon contest for the most beautiful vegetables made "doll" was held. The local culinary masters prepared tomato soup on the square and visitors tasted it again and again coming back for more. A lot of guests and media visited - prior the festival, during the two festival days and after that.

For the next year the festival is already ensured financially. Stamboliyski Municipality signed a contract with the Ministry of Regional Development and Public Works for the implementation of project "Festival of Peppers, Tomatos, Traditional Food and Crafts - Cultural Brand for Development, Regeneration and Increased Attractiveness of Stamboliyski Municipality" under the Operational Programme "Regional Development" 2007 - 2013. The project has been approved for funding under the scheme "Support for Creation and Promotion of Innovative Cultural Events" and its goal is to strengthen the role of culture as a catalyst of the regeneration process and a key characteristic for development of the region and increase its attractiveness. The project will be implemented in 2012 and 2013 and is a continuation and upgrade of the efforts of Chitalishte "Luben Karavelov 1897", Kurtovo Konare that started the organization of Kurtovo Konare Fest 2009 thanks to the support of AGORA Platform and America for Bulgaria Foundation.