When there is Garbage, There is no Golden Fish

When there is Garbage, There is no Golden Fish 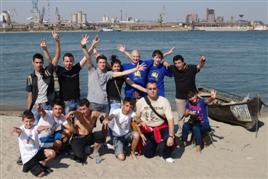 The youth from the Youth Volunteer Center at Chitalishte "Napredak 1871" took part in the shooting of the musical video clip „Golden Fish" . The young people - Asia Petrova, Giulche Rushidova, Aicho Kasabov, Billie Erdinov, Erol Goranov, Sunny Nurdjanov, Seven Saliev, Frako Sinanov as representatives of the Danube town were involved with the ecological message "Young people of Bulgaria care and keep the natural resources and rivers clean! Be responsible to the nature!"

The Youth Volunteer Center at Chitalishte "Napredak 1871" was established in the framework of the AGORA Platform's project "Activating Communities through the Chitalishta in Bulgaria: second phase", funded by America for Bulgaria Foundation.

The establishment and development of partnerships of the Volunteer Center started with the Charitable carnival "Tradition and Modernity" that was held on August 12th, 2011 as part of Nikopol's celebrations. The volunteers from the Youth Information - Consulting Center "Intelekt", Pleven (YICC) who took part in the Carnival expressed an interest in partnership and future implementation of joint initiatives. That led to the staging of the clip "Golden Fish" on the Nikopol's shore.

The video clip would be the "face" of the planned by the YICC "Intelekt" youth campaign in 2012 for cleaning the Danube riverside. The idea is to carry out massive eco action with youth from municipalities at the Danube - Nikopol. Belene, Zagrajden and Baykal. The video is based on the humorous elements; the heroes are fishermen who want to attract the fish with guitar and beat box improvisations. Waiting for the big shot the young people dance hip hop and break on the shore and finally instead of the golden fish an old shoe comes out of the river.

Milen Parvanov and Kristian Popov are the performers and authors of the music. Maria Georgieva and eight of the volunteers from the Nikopol's Youth Volunteer Center at the Chitalishte are involved.

The information was prepared by Mrs. Nikolinka Hristova, Secretary of Chitalishte "Napredak 1871", town of Nikopol.