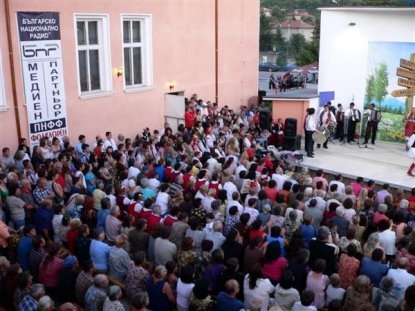 Chitalishte "Svetlina - Tcarevec - 1927" was the definite winner with the initiative that gathered people, local authorities and business for the reconstruction of both abandoned places, as well as for creation of ethnographic collection. For launching of the renovated summer cinema and stage in 2011 a National Festival "Folklore Izvor 2011" was organized where more than 3 000 people took part and in 2013 its third edition is awaited. A year after the award ceremony and almost two years since the opening of the stage that gathered thousands of guests from all over Bulgaria and abroad we approached the team of Chitalishte "Svetlina - Tcarevec - 1927" with some questions.

How did the community welcome the news of the award and was it provoked to start a new initiative?


Everybody – the Chitalishte staff, members of the Board and the whole community – was happy that our initiative was the winner in Contest AGORA 2011. All agreed that in the 85 year history of the Chitalishte that was the biggest and most significant award resulting from the donations of the village people and the belief they had in us. From now on, we are reconsidering our work and the motto that leads us is "By the People for the People".

Will you share with us, what was the effect of the award of Contest AGORA 2011 and how it was used?

The money was invested in creation of a web site of the festival "Folkloren izvor" www.folklorenizvor.com where information about the festival is uploaded as well as all other initiatives of the Chitalishte.

What can you recommend to fellow colleagues who intend to develop and involve the local communities in significant civic initiatives?

We would recommend to colleagues to open their hearts, to believe that things do happen and even if they do not "win" to work for their settlements. Also, to develop the activities of their Chitalishtes in benefit of diverse ethnic and age communities regarding social, nature, cultural and infrastructure assets for sustainable development.

Photographs from the Award Ceremony