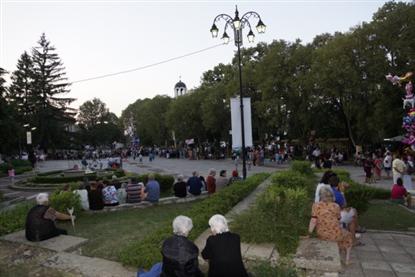 On July 27th, 2013 some crafts and traditions of Strandja were revived in Malko Tarnovo. That happened during the festival "Po Malkotarnovski - ot izvora na Strandja" for a second year in a row with the active involvement of the local people.

The first edition of the festival was held on July, 28th and 29th, 2012 in the framework of AGORA Platform's project "Activating Communities through the Chitalishtes in Bulgaria: second phase", supported by America for Bulgaria Foundation and with the cooperation of Malko Tarnovo Municipality. The idea for organizing and holding of the festival came as a result of public discussions for identification of local problems and searching for solutions. Therefore, the residents of Malko Tarnovo directed their civic activity towards recovery of the Strandja folklore culture and revival of traditions in an attempt to preserve the local memory and customs.

In March 2013, the festival received the special award "Art and Culture for Development" at Contest AGORA 2012 presented by Communication Agency ProWay Ltd.

Here is what Mrs. Milena Drencheva, Secretary of Chitalishte "Prosveta 1914", organizer of the event shared with us about the festival: (the interview is in Bulgarian language)