You are Welcome to Have Fun, Not to Compete!

You are Welcome to Have Fun, Not to Compete! 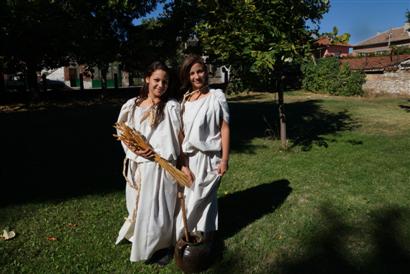 With these words Mrs. Marena Vachkova, Secretary of Chitalishte "Zora - 1903" in Radilovo invited the guests and participants at the third edition of the "National Festival of Keshkek and Peoples' Skills that was held on September 21st - 22nd, 2013.

The development and upgrade of the festival in 2011 and 2012 was possible within AGORA Platform's project "Activating Communities through the Chitalishta in Bulgaria: second phase", funded by America for Bulgaria Foundation.

As is became already a tradition, the festival program started with artistic presentation of the keshkek legend. Then on the open stage local and guest folklore ensembles performed, legends, customs and old games were presented. Also, break dance groups performed showing choreography based on Bulgarian music.

During the two festival days there was keshkek tasting, as well as stalls with traditional food, agriculture produce and crafts.

This year, the festival program was enhanced with a Fair of Products from the Pazardjik region and with a new attraction "How to Make Butter in a Bottle". The workshops held within the festival were combined in an 'attraction package' - keshkek, milling grains with a big stone, making of butter, bread making, loom workshop, songs and dances from Radilovo, retro-photo, a portrait from life by professional artist.

Therefore, the tourists who managed to visit all nine attractions and gather the stamps from the workshops included in the attractions package will be rewarded with a present - hand made souvenir by the local volunteers.
The festival was presented on the Bulgarian National Television - Channel 1 in the reportage of Vilhema Dureva "What is keshkek - how do you make it and what is it for?"