Gabrovo is the winner in Contest AGORA 2014

Gabrovo is the winner in Contest AGORA 2014 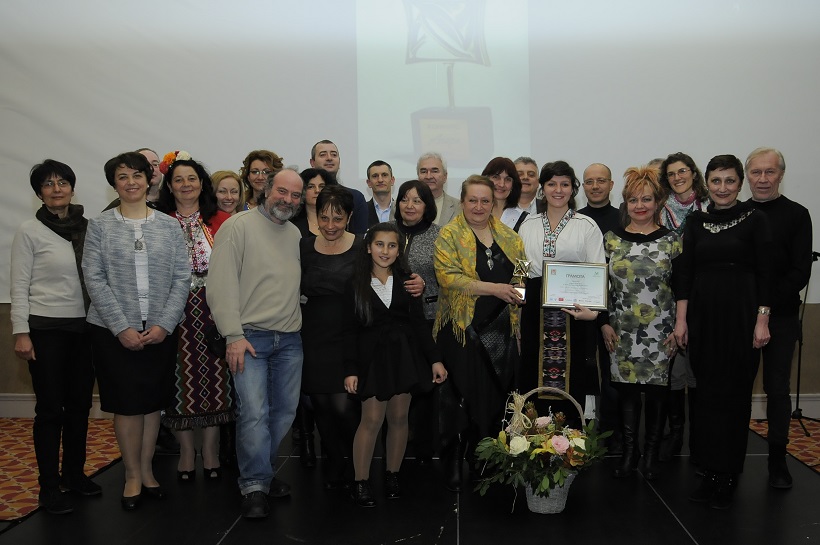 The awards of Contest AGORA were handed out during the ceremony held on March 12 in Sofia for the most successful initiative, implemented by Chitalishte and mobilized local residents for finding a solution to a real problem in 2014.

A special address to the contest participants and guests was made by Mr. Ivan Ivanov, Vice-President of the National Assembly. From the Contest stage he emphasized the role of Chitalishta as local civic organizations and their importance for community development.

After a secret vote the ceremony guests decided the contest award to be presented to Chitalishte "St.St. Damaskin and Onufryi Gabrovski - 2011", Gabrovo for the creation of a village Mall - Bazaar "Forgotten traditions, vibrant flavors" in the town. The Village Mall started in 2014 and to date four editions have been held. The Mall provides opportunities to producers from the region to sell their local home-made produce in town. As is the mood in the mall, the event is accompanied by lots of music and mood, also in the Village Mall people dance and sing. The Chitalishte initiative reminds to the residents and guests in the region about the ‘Happy markets' held in gabrovsko in the past.

During the official ceremony, the five finalists in the categories of Contest AGORA 2014 received their awards. The Contest Jury selected the following: Category "Community in Development" to Chitalishte "Hristo Botev 2008", Garvan village, Gabrovo municipality for "unForgettable Treasure"; Category "Solidarity and Humanity" to Chitalishte "Pencho Slaveykov Malashevtci district - 1919", Sofia for the initiative "Blue Summer 2014"; Category "Art and Culture for Development" to Chitalishte "Izgrev - 1930", Banichan village, Gotce Delchev municipality for "Bright Neverending Stories on the Embroidered 'Pishtumali' of Banichan"; Category "Perspectives for Growth" to Chitalishte "Drujba -1870", Harmanli, Haskovo region for the initiative "Return of Rock and Pop Music in the Town of Harmanli"; Category "Most Productive Partnership" to Chitalishte " St.St. Damaskin and Onufryi Gabrovski - 2011" for Bazaar "Forgotten traditions, vibrant flavors" - Village Mall. Read more about the finalists here.

For a forth consecutive year, the Ministry of Culture awarded a special certificate "Contribution to the Development of Chitalishtes". This year the holder of the certificate was Lovchansko Chitalishte "Nauka - 1870" for the initiative "Lilac Musical Evenings - Lovech 2014", the recognition was presented by Mrs.Silva Hacheryan PhD, State expert in "Regional Activities" department. "Lilac Musical Evenings - Lovech 2014" are four evening musical events performed on different stages within the town by the State Opera Rousse, Ballet "Arabesque", Theodosii Spassov with orchestra and the Pleven Philharmonic Orchestra.

A special prize - pocketable reader PocketBook Mini - received Chitalishte "Drujba -1870", Harmanli for the initiative Library Club "Readers' Class". The prize will enhance the modernization of the library and encourage the e-reading among children and youth in the community. The prize was handed out by Mr. Galin Borodinov from Agency PR Point on behalf of PocketBook.

That brought to an end the sixth edition of Contest AGORA where more than 35 initiatives from all over the country took part, competing in five categories and for the big contest award, as well.

The event is organized by Platform AGORA, financially supported by the Charles Stewart Mott Foundation and in partnership with: PRoWay Communication Agency, who provided the award in the category "Art and Culture for Development"; the University Press "St. Kliment Ohridski" traditionally ensured a collection of selected books for the contest finalists; Hotel "Ramada Sofia" who hosted the contest in the "Diamond" hall and contributed to the festive spirit of the event.

Contest AGORA is realized with the media support of the Bulgarian National Radio, dir.bg, dnes.bg and ngobg.info (Information Portal of NGOs in Bulgaria).