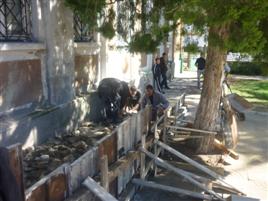 The Chitalishte at the village of Ruptci was the first one that started building a ramp to the building's entrance in the whole municipality of Cherven briag. That action will ensure access to the building for people with movement difficulties and mothers with strollers. The initiative is implemented in the framework of the campaign of Chitalishte "Svetlina 1999", Cherven briag for ensuring accessible environment at cultural institutions (Chitalishtes) in the Cherven briag municipality. The campaign of Chitalishte "Svetlina 1999" has been carried out as part of AGORA Platform's project "Activating Communities through the Chitalishta in Bulgaria: second phase". The pure financial contributions to the initiative amount to 2 755.04 BGN at the end of October 2011.

On October 19th, for one more time the residents of Ruptci proved that they have a modern vision for the future and are willing to ensure access to culture for all in their village. The active civic society in Ruptci decided to get involved in the initiative starting with the raised funds by individuals and companies (total 290 BGN) and relying on donation of materials and volunteer labor.

Eleven of the sixteen construction workers who volunteered were young people; two candidates for mayor of the village volunteered labor; pupils from the nearby school helped during the school breaks. The ramp's formwork was made for six hours, pebbles were spread and concrete was poured.

Very soon for the people with movement difficulties and mothers with strollers an access to all events held in the Chitalishte hall will be ensured.

The residents of Ruptci support the idea that Chitalishtes should activate the local civic communities because in small locations these are the only places where the Bulgarian Renaissance spirit still is alive.