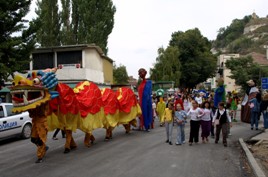 On October 02nd, 2009 - World Smile Day - a Charitable Carnival "Give a Gift - be Blessed" was held in Nikopol. The Carnival was organized by the "Nikopols' Spiritual Leaders - the Big Capital of the Small Town" project team of Chitalishte "Napredak 1871" in the framework of the AGORA Platform's project "Activating Communities through the Chitalishta in Bulgaria", funded by America for Bulgaria Foundation.

The Carnival kicked off the fundraising campaign. The donations will be used to implement both initiatives under the project: to support the design and creation of memorable plate of the Nikopol's spiritual leaders and to renovate the children's section of the library.

The Mayor of Nikopol Mr. Valeriy Jeliazkov, MD opened the Carnival, launched the donations campaign and greeted all the participants. The 121 carnival dressed participants with starting age 1 to 101 years were rated by the Costumes Contest Jury with Mrs. Nadia Bojinova, Deputy - Mayor acting as a Jury's Chairperson.

On the Carnival Day alone 525 BGN were donated from private and business donors. You can contribute to the fundraising efforts as well by participating in the "100 Letters to 100 Friends" initiative.