Responsibility for the Future with Theatre Marathon "AGORA"

Responsibility for the Future with Theatre Marathon "AGORA"

Pupils from schools in Sofia and members of eco-clubs, art fans and people with disabilities enjoyed performance "three in one" with a marathon length - 4 hours. Young artists from Romania, Turkey and Bulgaria presented their vision on Millennium Development Goals (MDGs) on Saturday, December 03rd, 2011 at the Youth Theater in Sofia. The three performances were united under the slogan "Together Responsible for Our Future" and the occasion was the International Day of Persons with Disabilities.

The small stage of the Youth Theater "Nikolai Binev" turned out too small for more than 100 enthusiasts who came on the early Saturday afternoon to see the performances. The event was opened by Mrs. Emilia Lissichkova, Chairperson of AGORA Platform who introduced the idea of the youth project "Art Changes Lives" and the stages it went through so that all of us can enjoy the results now. The project has been funded with support of the "Youth in Action" Programme of the European Union, Action 4.5 - Support to information activities for young people and those active in youth work and youth organizations.
The audience was welcomed by Mrs. Maria Zlatareva, Head of UNDP Office in Bulgaria. Mrs. Zlatareva expressed her satisfaction with holding of such type of youth initiatives and shared with the audience the progress of Bulgaria as well as of the whole region towards the achievement of MDGs, supported with UNDP data.

The official part of the event continued with greetings on behalf of the Embassy of Romania in Bulgaria. Mr. Gligore Gherceanu, Minister Counsellor for Press and Culture Issues at the Embassy of Romania wished to the young artists from the three countries a lot of success in 2012, opportunities for development and work on interesting international projects in the future. Also, Mr. Gherceanu wished for all the people in the public to have new friendships, more cultural events and more theater in their live.

Next, on behalf of the Embassy of the Republic of Turkey in Sofia, Mr. Sinan Zeren, Second Secretary of the Embassy delivered the best regards of H.E. Ismail Aramaz, Ambassador of the Republic of Turkey for success to all participants. The art really changes people, the way they react and their perceptions of the world. In international scale art overcomes borders and thus should be supported. Events like this contribute to the convergence of different cultures and strengthen the role of culture as a basic element of the development as a whole and for achievement of the MGDs in particular.

The Head of the Representation of the European Commission in Bulgaria, Ms. Zinaida Zlatanova was not able to honor the event personally but sent her greetings in writing. Ms. Zlatanova in her message underlined the importance of art as one of the most influential tools that touches everyone in a different way and makes people think despite of their busy daily life. By no accident in the EU's growth strategy for the coming decade - Europe 2020 - youth and education are among the key fields of action aimed at more efficient results in combating poverty and social exclusion as well as improvement of the competitiveness of Europe as a whole. 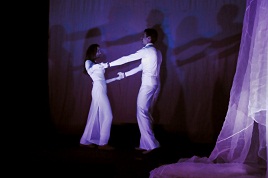 The first performance was of the hosting country - Bulgaria, presented by the young actors with impaired hearing from "MIM ART" theater at "Tishina" Association. Their pantomime and dance performance "Purification" was applauded by the audience who stood up to honor their talent. The actors sent their universal message for care, actions and responsibility of people for preservation of the environment through the means of pantomime, synchronized singing and dance facilitated by sign language interpretation. The discussion with the public that followed the performance, the actors from "MIM ART" theater shared why MDG 7: Ensure environmental sustainability is crucial and how each and every one of us could do even a little to contribute to its preservation. The Bulgarian performance came to an end with the involvement of the audience in the visualization with a sign language of the slogan "Together Responsible for Our Future".

Next performance "You Are Not Alone" was a puppet theater presented by Ucaneller Culture and Art House Association, Luleburgas, Turkey featuring also MDG 7: Ensure environmental sustainability. The Turkish youth introduced the eternal story of how the world was created by the four elements: water, fire, air and earth. Then the first human being came to inhabit the Earth and very soon understood that was not alone. Another human being appeared who wanted the same - own place under the sun. That fueled a conflict between the two of them; their fights and rivalry resulted in separating the world in two. The specific situation challenged the four elements and they tested our characters' abilities. All of the above came to point out to our characters that together they can do more, that the world we live in would be a better place if there is someone beside you, a friend you can count on. The fights of the puppet characters were accompanied with a lot of laughter and funny moments. The audience sincerely applauded the end of the puppet theater performance however their wish was the performance to go on. The Turkish actors also mentioned how important the topic of environment is for them. The issue should be tackled by all generations together in every country around the world. The people in the audience pronounced in Turkish language the slogan "Geleceğimiz için birlikte sorumluyuz". 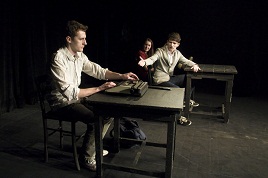 The last performance in the theatre marathon "AGORA" was presented by PATRIR, Cluj - Napoca, Romania. The Romanian youth who worked on Goal 2: Achieve universal primary education wrote on their own the pot of the forum theater "School dream". The theater provoked the audience to get involved and guide the destiny of the talented Marius, a pupil with impaired vision in 8th grade, in a more positive direction. His dream is to become a violinist. He has been admitted in the state school of music and has plans for a bright future. All of a sudden, his new classmates do not accept him because of his "difference" and his dream seems to fall apart. By the means of the forum theater, the Romanian guests presented and played situations where the opportunities of a person were limited or he/she had been attacked by external forces. The situation with Marius was played on the stage for the audience. Then, the situation was played a second time, the audience was invited to intervene and replace a character they identify with. The idea was to see how they would deal with such situation in real life. The goal was to share and design strategies for resisting and dealing with the problems surrounding us. There were some active participants in the audience who intervened in order to change the behavior and attitude of pupils, their parents and the school management. Everyone has the right to have an access to quality education, equal opportunities and talent development. "Suntem impreuna responsabili pentru viitorul nostru" was the slogan in Romanian language that all people in the hall repeated inspired by the positive end of the play. The Romanian young people revealed how interesting it was for them to talk with teachers and children both before and after performing "School Dream" for them. The involvement of pupils in the forum theater helped them to understand and sense the problems in a new way. Especially for the children with impaired vision it was a mind opening experience that pushed them to get involved personally into the decision making as far as their destiny is concerned.
Outside was already dark but nobody wanted to leave. The theatre performances would not end with this December marathon. On the contrary, Pleven and Burgas will host the next theater performances during the first months of 2012.

This project has been funded with support from the European Commission.
This publication reflects the views only of the author (AGORA Platform) and the Commission cannot be held responsible for any use which may be made of the information contained therein.