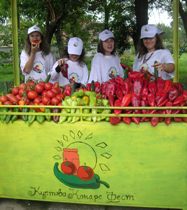 The kick off of the First Festival of Peppers, Tomatos, Traditional Food and Crafts in the village of Kurtovo Konare was marked by a heavy downpour of rain.The program started on October 03, 2009 with an exhibition of old photographs related with the local tradition of growing vegetables. In the early afternoon the Chitalishte "Luben Karavelov" hosted a meeting of local agriculture producers and representatives of the civic sector with Mrs. Stefanka Tsoneva, Director of Regional Directorate "Agriculture" - Plovdiv and Mrs. Krustina Mandova, President of ETP Foundation - Sustainable Development Projects - Sofia. The participants have learnt more about the project opportunities provided in Axis 3 "Quality of Life in Rural Areas and Diversification into Non-Agricultural Activities" under the Rural Development Program 2007 - 2013. The participation of Stamboliiski Municipality in partnership with Chitalishte "Luben Karavelov" and local business representatives in the LEADER approach was discussed. More specifically, the measures under sub-measure 431 - 2 related with acquisition of skills for establishing Local Action Groups (LAGs) and developing a local strategy.
The heavy rain pouring on Saturday evening forced the audience into the Chitalishte's foyer that was transformed into an impromptu stage to provide space for the initially planned open air concert. The best Bulgarian guitar player - the phenomenal Ognyan Videv took over the stage. He mesmerized the audience with jazz and flamenco. The evening continued with the performance by the bard Boyko Georgiev and his brother Petar Yankov - Pesheto (who has performed with the groups "Djendema", "Shturcite", with Stefan Valdobrev's film band, Valdi Totev, etc.). An interesting fact is that the brothers' mother is from Kurtovo Konare and this made the experience more thrilling and promising new encounters.


The second day of the Festival, October 04th welcomed us with better weather and many children who have taken out to the square their entire families on this Sunday morning. There all were able to taste the "lutenica" prepared for the last three days by Katia and Veska, to sample the local specialties, breads and banitsa that were home-made and artfully decorated in the pavilions by the local masters, to observe the making of dolls from corn halm or vegetables but mostly to participate in the contests and games. In addition, to the local residents there were guests from Nessebar, journalists and enthusiastic travelling students.The contests involved some like throwing peppers and tomatos to a longer distance and were fun not only for the participants but also for the audience that tried not to be hit by vegetables flying with high speed. Though, the most attractive contest was "The Speediest Eating of Salad" where the public encouraged the children by any means! Special attention and many cameras were directed towards Mr. Yuriy Dimo, who is the best fruit and vegetable carving chef not only in Bulgaria but in the Balkans as well. Under the curious observing eyes of the public Mr. Dimo carved incredible figures in carrots, melons, watermelons and gained a lot of enthusiastic carving followers.

The folklore program started with the "kukeri" from Bania village who drove away the evil spirits from Kurtovo Konare. Thus, clearing the stage for the youngest participants - the children from kindergarten "Detski rai" who sang, danced and recited poems about vegetables. Then, the stage was taken in succession by the male group performers of authentic folklore "Star merak", Bansko, the female authentic folklore group from Trivodici village, the Kurtovo Konare folklore chorus, the folklore dancers from "Elika", Plovdiv. Till late Sunday evening the folklore dancers from "Lyra" dance formation guided by their instructor Ivan Stefanov and leaded by their solo artist Radka Stefanova, Chairperson of Chitalishte "Luben Karavelov" entertained the public. Their contribution was also the specially composed Hymn of the Festival.
We are already anticipating the next year when we are going to gather again to taste home-made "lutenica", drink fresh tomato juice and ... something else. Something that derives from the local people, local authorities and business, from their joint efforts, by applying creative approach to revive and promote the local traditions. Still next year, a lot of hard and at the same time fulfilling work should be done for further development and transformation of the Festival into a traditional and bigger one.
We dedicate this first Festival to Grandfather Alexander from Kurtovo Konare who was born exactly 150 years ago and who was awarded in 1909 with Governmental Medal for Merits. Do you know why? Interestingly, he was the one who brought the tomato seeds in Bulgaria and built the first Factory for paprika in Bulgaria in 1894 here in the village of Kurtovo Konare. What else is left for us his successors but to continue his cause ...
Back
Tags: active civic communities, kurtovo konare