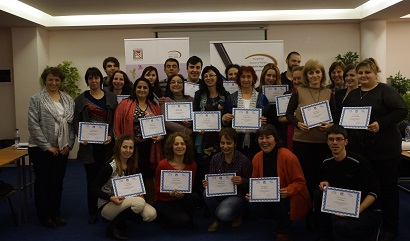 From February 11th to 14th, 2016 in Sofia was held the final third module of the training "Programme Active Civic Participation and Leadership" developed by Platform AGORA and the Bulgarian School of Politics "Dimitry Panitza" within the project „Life Changing Challenges". The practical tasks were the focus of the final module of the Programme and included presentation of the stakeholders' analysis on specific problems in 12 communities, planning and holding of advocacy campaigns, mobilization of local resources and how to attract the media interest and justify our thesis during an interview.


The first training day was devoted to negotiations with various stakeholders as well as their involvement in the process of public policies development. The lectures were based on the stakeholders' analysis made by each training participant on the problems identified by the local communities.


The second day, Daniela Dimitrova from Association Pleven Public Fund - Chitalishta presented the diverse opportunities for mobilization of local resources. The program continued with a lecture of the psychologist Nedelcho Nedelchev for facilitation of group discussions and how to hold effective workshops. The afternoon session and the next day morning session were devoted to planning and holding of advocacy campaigns. In the small groups work, the participants developed plans for advocacy campaigns on the problems identified by the local communities. The lecture was prepared by the political scientist Dr.Angelina Markovska.


During the third module of the training programme there was a special lecture on etiquette and protocol. The speaker was Anatolyi Pazyiski, a protocol expert.


The participants also had lectures on working with the media. The journalist, Boyko Vassilev, host of the political weekly programme "Panorama" on Bulgarian National Television, talked about media campaign planning and focused on basic rules for TV interview. The participants had the opportunity to exercise how to act when the camera is on them and were interviewed by the top journalist, who provided them with a feedback and recommendations.


On final day of the training, a closing discussion was held and the trainees received their certificates for successful completion of the "Programme Active Civic Participation and Leadership".


The next step for the local leaders is the work within the communities and preparation of solution options for the community problems and their presentation at the closing discussions to be held in March 2016.
Platform AGORA and the Bulgarian School of Politics "Dimitry Panitza" in partnership with 12 Chitalishta from all over the country work for supporting the local communities and leaders in building mechanisms for decision making within the communities, thus increasing the citizens' participation in the decision making process. The project is financed by the NGO Programme under the European Economic Area Financial Mechanism (2009 - 2014).